Bass and Pike frozen in ice 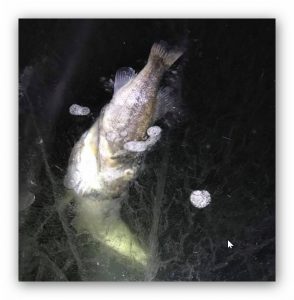 A Bass and Pike frozen in Ice is something not seen every day. This is something that is rarely ever seen. Two fish seemed to be locked in a battle and frozen in time. A Pike didn’t get to finish its last supper (a Bass) before freezing and being locked in ice on the lake they were found in.

Two brothers, Anton and Alex Babich, came across this rare find while ice fishing on Wawasee Lake close to Syracuse in northern Indiana. After they posted a photo of it on Facebook it went viral. The original picture was posted January 10th 2017, nearly a year ago. In that time it has garnered  4.8K reactions and nearly 16K shares.

Proof in the video